Chinese calligraphy, also called Chinese brush calligraphy or “shufa”, is a high art form unique to China. Many Asian cultures have originated their own calligraphy styles, but China’s is unequaled because of its beauty, grace, and history. The artistic value of the calligraphy is found in the rhythm and lines. It is an outlet for the artist to practice self-discipline and concentration as well as release his innermost thoughts and emotions. Many Chinese regard it on a level above music, paintings, and statues, and equal to poetry as a form of self-expression. 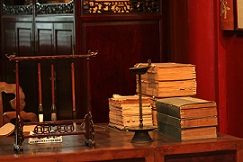 the Chinese brush calligraphy are a bit hard to trace, but local tales say it goes back over 4000 years to the time of the legendary Yellow Emperor (2497-2398 B.C.) At that time pictograph-like images were carved on animal bones or tortoise shells and named “oracle bone script”. From the Shang Dynasty (1766-1050 B.C.) to the Zhou Dynasty (1100-221 BC.) Chinese calligraphy continued to progress and be used on bronze wares. It was only after Emperor Qin Shi Huang, famous for his role in the Great Wall and his Terracotta Warrior army, united China under his rule as one country did it really gain popularity as a common art form.

He simplified Chinese characters and regular rules were established, making it easier for people to learn and master. This Chinese art form continued to progress and during the Tang Dynasty (618-907 AD) a new type of cursive script was formed and standardized. This kind of calligraphy stroke is much simpler and is written freely, but is not as easy to read. During this golden period there were many famous Chinese calligraphers who were renowned across the country. After the downfall of the Tang Dynasty, calligraphy began to decline before reviving again after the downfall of the Ming Dynasty (1368-1644 AD).

Today Chinese calligraphy is once again a countrywide discipline and art-form highly appreciated and sought across the world. Anyone can practice it and all that is required is a simple set including: brush, ink, paper, and inkstone. Its fun for amateurs to try, but to become good at it years of practice as well as natural talent are needed. It requires discipline, intense concentration, good posture, and a soft stroke. Before the strokes are put to paper, the artist will picture the symbol in his mind and each one has his own unique way of writing. Persevering in this art can cultivate personal character and is good for health.

Calligraphy is often combined with landscape paintings. Artists paint beautiful backgrounds of mountains, lakes, trees, and bamboo and then write proverbs, sayings, or poems in calligraphy in the foreground. This is where the term “calligraphy painting” comes from. This form of Chinese art is great for hanging on the walls of your home to give a touch of Asian grace and beauty. Taking the finished rice paper and using it to make a wall scroll is a discipline that takes a lot of skill as well. But it is certain be a great conversation piece as guests are sure to ask what the meaning of the characters is.

Do you like Chinese school Leighton Buzzard and Milton Keynes? Your comments and suggestions are valuable to us.